After some research, we discovered two ways that this can be done. The key is not is the SWF itself, but rather in the HTML used to embed the Flash object. Both ways to create a transparent background are essentially the same, but the way to go about them is different.

The first way is to publish the HTML file directly from Flash while publishing the SWF. Open the File menu and choose Publish Setting. In the Publish Settings dialog box, click the HTML tab (If the HTML tab is not there, select the checkbox next to HTML in the Formats tab and the HTML tab will appear). Click the drop-down next to Window Mode and choose Transparent Windowless (see image below). When you click Publish, this setting will add a parameter to the object tag that will make the SWF background transparent. 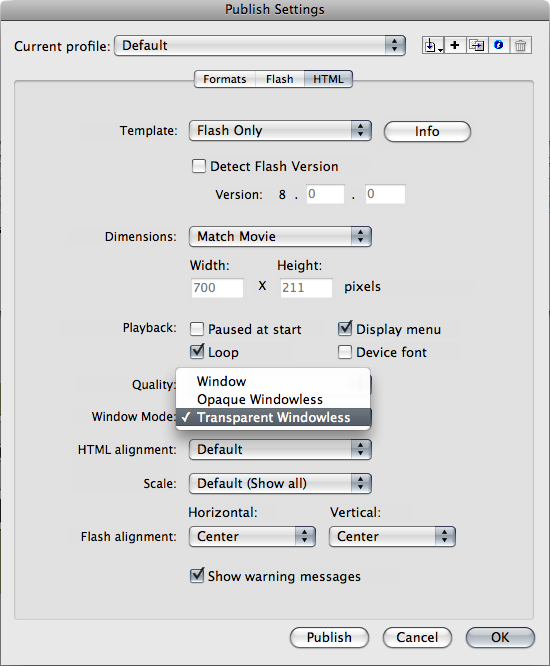 The second way is to edit the HTML directly. After the beginning object tag, insert a parameter named “wmode”, with a value of “transparent”. Using the W3C validated code from my previous tutorial, Adding Flash to a W3C Compliant Web Page, the code should now look something like this:

While transparent SWFs can definitely be handy, a word of warning should be mentioned. Not all browsers and versions of Adobe’s Flash Player support transparent SWFs. As long as the person viewing the Web site has kept their browser and Flash Player updated, they will never have a problem, but as every good Web Designer knows most people don’t. While this will not affect the functionality of the SWF, it could compromise the design of a site. Ultimately, my friends and I decided to forgo using a transparent SWF to make our client’s Web site compatible with as many browsers as possible.