One of the earliest free image editing applications, GIMP (GNU Image Manipulation Program) has been around for more than fifteen years. It was originally created for UNIX systems, but has since been ported to Windows and OS X. I have known about GIMP for several years now, but until I began writing this review, I had never used the program.

GIMP is highly compatible with many different formats. It can even save files to various formats, including Photoshop (psd), XHTML, and C source code. It can be used to create icons and eps files. The one format I noticed was missing was the svg format, which is understandable since GIMP is a raster program instead of a vector program.

As mentioned earlier, GIMP is available across multiple platform including Windows, OS X, and Linux. The one difficulty I did encounter when installing GIMP on my Mac was the release from the Web site would not compile. I had to install a version from another Web site, Gimp on OS X, but then it worked just fine. On UNIX systems, GIMP runs using the X11 utility, so be sure it is installed before attempting to install GIMP. The newest version of OS X has X11 installed by default, but older versions require a manual install.

GIMP is an open-source program, therefore anyone can modify it or create their own port to another OS. That being said, there are also over 200 plug-ins created by users and listed on the GIMP Web site.

In the brief time I used the program while preparing for this review, I had no need to access the help files. However, I did notice that the Web site has a forum and a user group to help with issues. The program also includes a user manual to help with basic program functionality. A word of warning: On the OS X version, the user manual is a separate download and install from the main program. Other versions may by the same.

I found the program to be quite user friendly. I sat down with my seven-year-old daughter, and within five minutes of installing GIMP we were able to draw a green monkey-man with blue pants and red eyes. Granted it isn’t a very good drawing, but it did only take five minutes and was drawn with a mouse instead of a drawing tablet. The one annoying quirk I found was with the X11 implementation of GIMP. In OS X, X11 opened each palette in its own window. Every time I wanted to change tools or colors, I had to click first to activate the palette before I could make the change. Then I had to click to activate the image window again before I could begin drawing. This may be different on other systems or with different implementations of GIMP. 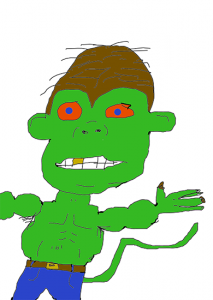 <<Back to all reviews