Over the weekend, I began working on a new idea for a Flash animated short. Several years ago, I performed an original pantomime entitled “The Skydiver,” and over the holiday weekend I began turning my pantomime into an animated Flash cartoon. Here’s a screenshot of part of the cartoon: 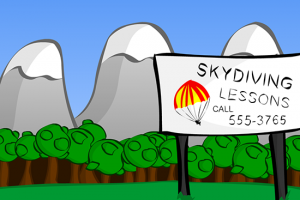 I’m doing some experimenting with this cartoon, and I plan to do most of the actual animation using traditional frame-by-frame methods, so it could take me a little longer to finish than it would otherwise. Once it is finished, I’m going to build a new page into my Web site just for Flash cartoons, and it will also be posted on YouTube.